Day 7 – Not International Night (except in fields)

Day 7 was expected to be lower convection levels and weaker climbs than previous days – task sheets at briefing were already on C and D tasks.  The club class were set 417km, standards 435km – same task going south with different start points – and 18m going north for 538km.  Launching commenced with the 18m at midday, when it proved barely soarable with gliders sinking gently into the towing routes – a situation not helped by poor visibility due to a cocktail of moisture, smoke and dust in the air.  Most people managed to stay airborne until the day got soarable but there was no chance of an early start since, as ever, it wasn’t soarable in the start sector.  The comp organisation wanted us back at the Sport and Rec at 7pm for International Night followed by the Baba Jaga ceremony – hmmm! It quickly became clear that it wasn’t going to happen…  Everybody landed out in all classes – and mostly late in the day, with some of the pilots a long way away.  Lucky for those in the 18m with turbos – Liz included – which just had the range to return from their end-of-day TP 170km from home.  Landing out can be a real issue in Australia – there are huge areas where there is little population, and even if you land near a homestead, you may find that after 3 years of drought, it’s been abandoned.  So the advice is land near the biggest road you possibly can, tarmac if possible.  Yesterday many of the Standard and Club class lande 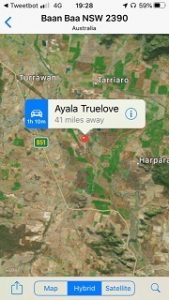 d near a conveniently placed main road with a town with a pub, which solved the dual problems of dinner and what to do until the crews arrived very nicely – in some way creating an offsite International Night. Ayala and Claudia were both home around midnight, but others had long retrieves and we hear that some still have gliders to fly home today as they don’t have trailers available.

International Night has been rescheduled for today which happily is a rest day, and the team are all off for brunch at the legendary Jan Dircks’ – this means we won’t need to eat for about a week and is a good base for whatever might be on offer this evening!